What's on your mind?

The japanese Rule of Rose wiki recently asked on twitter in which countries the game was actually banned. We know its release got canceled in some countries, that there were polemics about it, but apparently it hasn't been "banned" anywhere, except in Italy.

Thus, they are looking for a source that woud list the countries where RoR has been banned from sale. Which sounds like a good idea since we seemingly don't have this either.

Also, where can we consult the sources used for the Controversy paragraph in the game's page?

Let's imagine if in the future someone decides to make a film based on the game.

Which actors would you like to see to play each character?

(edited by TJDetwailer)
Rule of Rose

I made a shadow box today, and 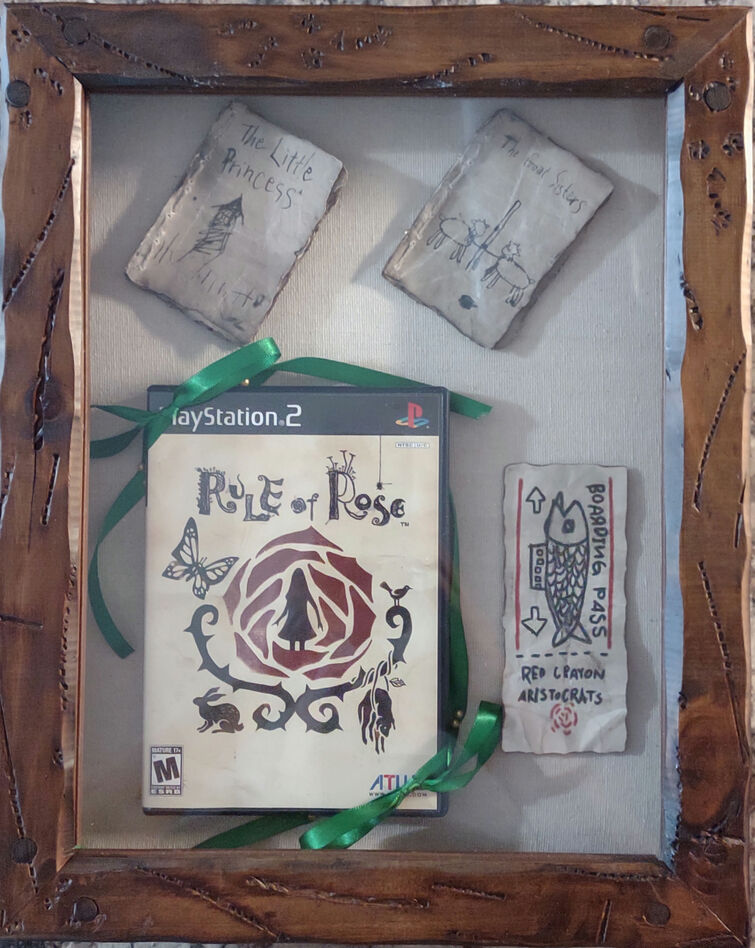 Is there anyone who had an account on the http://ruleoftherose.proboards104.com/index.cgi forum? Anyone participated there? Perhaps, you still have an an access to it, or possess some info about it?

I made this video talking about the game and everything that happened to it when it released. I'm not sure how to share it soI figured I'd start here. There is also a spanish version if anyone is interested.

The first one is titled "A miniature garden" and revolves around Eleanor.

The second is called "The hapless children" and focuses on Wendy.

The stories are of course non canonical but might still interest some people.

Since the books are in japanese, I asked redditfor help to traduce here if anyone is interested or willing to help.

(edited by Y-project)
I was curious about setting up a Discord for Rule of Rose. Is this something that people would want/help out with?
(edited by HarpoonThe)

Someone created an "Alexis" in the girl's section, now maybe I'm just forgetting something I haven't played this game in ages b ut I'm pretty positive that they didn't have "Diva's" back then nor did the game EVER have a "Diva" rank in the Aristocrat club.

Hey guys! Getting ready to start a fresh playthrough! A game I haven't played in a long time. Rule of Rose! Anyone who knows it LOVES it, anyone who doesn't know it, well they need to correct an error! Come join us tonight 8PM EST! HERE https://www.twitch.tv/evilannie25

(edited by Evilannie)
Where can it be found?
(edited by Velink)
Hoffman

I found a cover of the theme 'Love Suicide', by a japanese girl on Youtube once. Though the rythm and music are different from the original song, I found if pretty good and worth a listening. It appears I can't find that cover on Youtube anymore so I came here to ask you guys. Does that, by any luck, reminds anything to anyone?

About the non-English PAL versions (Spanish, Italian or French). If I get those, besides the box and manual, will the game have an english option?

I think it's wonderful that someone started a Rule of Rose wikia, but it's importan for the articles to separate the facts from the game, from personal opinions and theories. I don't think Diana was a "possible sociopath" because we don't know how things really were in Jennifer's forgotten past, what we are seeing is a distortion of what happened. You can use the Once Upon a Time chapter quotes as a reliable reference, and describe how characters are despicted in game, but you can not say how characters felt, what actually happened, etc. The sad truth is that we know little to nothing about this game and it's characters, but it's better to stay by facts than to make up things that never happened.

I was looking in to some more information on the game and came across a small bit of info from the Tokyo Game Show 2005 here. I'm unable to reaad Japanese though and was wondering if there was anyone here who could translate that photographed page to English? I also wanted to see if I could find the full document/catalog from the above link but haven't had any luck thus far, any help would be great :)

If Wendy killed Brown like 4 months after Jennifer found him as a puppy, why in the game he is shown to be an adult dog? I don't think a dog can grow so fast, in only 4 months...

Amazon Japan only sells MP3s to Japanese consumers but there are a few ways to get around that.

I rather have a physical CD, something I can hold in my hands so I skipped on it. I already downloaded a LOSSLESS version of the soundtrack.

Hi, I was hoping/wondering if there is any information about version differences, so not only JPN, EU and US. But if there are numbered versions such as 1.01, 1.02 (for example). Any and all information would be most appreciated even down to the minor and obvious things such as language differences.

There is a detail trat troubles me about Hoffman's right hand in theOld Photo. do you think he is patting Eleanor's head or is he pressing a camera's interruptor? I'd like to know what you guys think about that.

I just want to know if the creators ever published or talked about an official or their own plot. I really liked the game, It became my nem fav game even though I've missed out a lot of important details of the plot and find it a little bit frustrating. It's also the first survivor horror i really played.