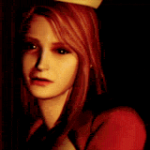 I really don't know why, but I absolutely love Olivia! I have practically written her entire page, and have poured by heart and soul into doing so. Olivia is a minor character, so I have to write every little thing I know about her.

The Red Crayon is a very symbolic element of Rule of Rose. The page only had one sentance when I first came across it, so I decided to write the rest.

The following is basically stuff you shouldn't do.

1. Punctuation almost always goes before quotes. This is a common mistake.

DO: Olivia said "You deserve to be gobbled up."

DON'T: Olivia said "You deserve to be gobbled up".

DO: I think it's really funny that Olivia said "You deserve to be gobbled up"!

DON'T: I think it's really funny that Olivia said "You deserve to be gobbled up!"

2. NO UNDERLINING (most of the time) OR STRIKE THROUGH (all the time!) ON NON-COMMUNITY PAGES D:

DO: Rule of Rose shares many similarities with Lord of the Flies.

DON'T: UNDERLINE OF STRIKE THROUGH ON NON-COMMUNITY PAGES D:

3. Use speculation only when it is widely believed to be true. Don't say "Mr. Hoffman gave Clara an abortion" because this is only a theory based on minescule hints. Unless it is extremely widely believed, make sure to make it clear that it is speculation. For example: "Many fans believe that Jennifer was a child during the entire events of the game and only appeared to be a young woman because of her belief that she was more mature than the rest of the orphans. However, this is improvable."

4. Please don't use brackets { in place of parentheses, as it messes up formatting.

Retrieved from "https://ruleofrose.fandom.com/wiki/User:LisaGarland?oldid=12704"
Community content is available under CC-BY-SA unless otherwise noted.